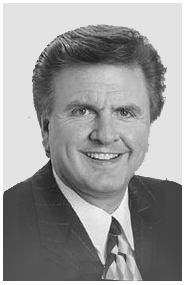 Lowell Lundstrom was both saved and called into the ministry in 1957. He and his family, conducted nondenominational evangelistic crusades across the United States. In more than fifty-five years of ministry he reached as many as one million souls for Christ.

Lunstrom served as president and chancellor of Trinity Bible College in Ellendale, ND for 10 years.

Lowell's music career started at the age of 14 when he started a rock and roll band. After his conversion, music became a large part of his ministry, traveling with his brothers and their families. The team produced a weekly radio program, television shows and 60 albums. He was inducted into the Minnesota Music Hall of Fame in 2005. He also wrote more than 600 gospel songs and fifteen books.

In 1996, Lundstrom and other members of his family founded Celebration Church in Minneapolis.

A Call to Greatness

Arrows of the Almighty

Discovering God’s Purpose in Your Life

Going for the Glory

How to Experience the Intimate Side of Marriage

How to Fight the Devil and Win

How to Get Ahold of God

How to Receive Your Healing

How to Win the War Satan Is Waging Against Your Family

How You Can Be a Supernatural Saint

How You Can Get the Most Out of Life

How You Can Live in the Spirit

Secrets that Will Help You Win Your Loved Ones to Christ

The Evangelist and His Goals

The Forces that Are Fighting Your Family

The Radical Reasons Why Christians Are Commited

The Signs of Christ’s Soon Coming

Three Keys that Will Unlock Your Life

Three Keys to a Successful Marriage

What Are You Saved For?

When God Sought to Kill Moses