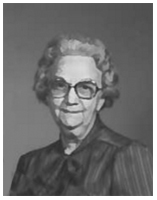 Elmer and Marion Peschke met and married in Alaska in 1945. They returned to Alaska as pioneer missionaries in 1953. The Peschkes were both ordained Assemblies of God ministers and pastored several rural churches in the Brazos Valley of Texas. They retired in 1969 but continued to minister in churches and served many years preaching in nursing homes in Bryan, Texas.

Sister Peschke's children said she left a wonderful heritage of living for God, to keep the faith and not stumble when life became difficult.

The Armor of God

Used by permission of Ruth Manning.