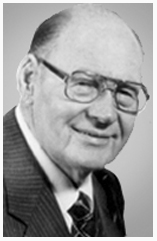 Morris Plotts began his ministry career in a Methodist church in Nebraska. After being baptized in the Holy Spirit he began holding revival meetings in Iowa. Plotts stirred up a lot of devils and found himself incarcerated for being a public nuisance.

For more than three decades he served the Assemblies of God Division of Foreign Missions, raising money for the construction of churches and Bible schools. He continued that work well into his eighties.

Brother Plotts received his heavenly reward at the age of 91, on August 29, 1997. A building on the campus of Jimmy Swaggart Ministries in Baton Rouge is named after Plotts.

Used by permission of Johnny Ford.