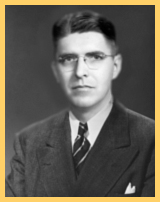 Philip Andrew Crouch was born December 6, 1916 in Perry, Iowa. He graduated from Central Bible Institute in 1937.The Assemblies of God assigned him to serve in Egypt where his parents were serving as missionaries. He was ordained by the Assemblies of God in 1943 in Cairo. During his twenty years in Egypt he worked with local churches and with Lillian Trasher at her orphanage in Assiut.

When travel to Egypt became impossible in the 1950s Crouch was hired as a professor at CBI. He was later promoted to president of the school. Under his 17 year tenure the school received accreditation and changed the name to Central Bible College.

Retiring from CBC, Crouch began a third ministry career working with his brother Paul at the Trinity Broadcasting Network. He served TBN for more than twenty years filling many administrative positions.

Brother Crouch was a very popular convention and campmeeting preacher and Bible teacher.

Brother Crouch retired to Maranatha Village in Springfield, Missouri in 2002 and finished his earthly pilgrimage on January 20, 2005.

Lessons from the Epistle of James

We Don’t Always Get to Do What We Want

Worship in the Church