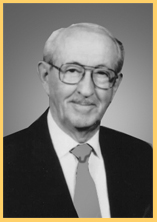 Raised on a farm near Rock Lake, North Dakota, Brandt accepted Christ at Lake Geneva Bible Camp near Alexandria, Minnesota at age 16 and soon felt a calling to the ministry. After completing high school, he attended North Central Bible Institute (now North Central University) in Minneapolis and went on to pastor churches in Stanley (1939-1945) and Grand Forks, North Dakota (1945-1951). Brandt’s ministry expanded when he was elected North Dakota District Superintendent (1951-1958), resigning to become the National Home Missions Secretary for the Assemblies of God (1958-1965). He then became pastor of First Assembly of God in Billings, Montana (1965-1970) and Montana District Superintendent (1970-1983). He served faithfully for 20 years as executive presbyter of the Northwest Region from 1981 to 2001. He also served on many boards and committees, including the board of directors for North Central Bible College, Central Indian Bible College, and Northwest University.

A gifted author, he contributed articles to the Pentecostal Evangel, Pulpit, Enrichment, and wrote several theological texts including Praying With Paul, The Spirit Helps Us Pray, Attitudes of the Beatitudes, The Pentecostal Promise, among others, and a number of Sunday school quarterlies. He also traveled as an evangelist to many countries including Puerto Rico, Thailand, Java, Canada, and South Korea. He is remembered as a leader, board member, teacher, preacher, and author, but most of all, he is remembered as a faithful servant of God.

The Power of God

The Core Cure for the Church’s Problems

Moving from the Natural to the Spiritual