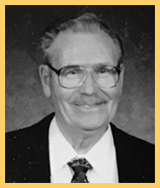 He was very active at Plainview First Assembly in Plainview, TX but after a healing miracle in 1966, he surrendered to the call to preaching.  Robert was ordained by the West Texas District of the Assemblies of God in 1977. He pastored three churches, Lorenzo, El Paso, and Hale Center until 1985 when he semi-retired. He continued preaching some on the side and sharing his testimony until 1995.

Robert was a life member of the DAV, the Military Order of the Purple Heart, the American Legion and the VFW.

Getting Past Your Mistakes