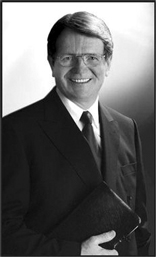 Evangelist Reinhard Bonnke is known for his Great Gospel Crusades throughout the continent of Africa. The son of a pastor, Reinhard gave his life to the Lord at age nine, and heard the call to the African mission field before he was even a teenager. After attending Bible college in Wales, he became a pastor in Germany for seven years and then went on to start mission work in Africa.

He began holding meetings in a tent that accommodated just 800 people, but, as attendance steadily increased, larger and larger tents had to be purchased, until finally, in 1984, he commissioned the construction of the world's largest mobile structure - a tent capable of seating 34,000 people! Soon, attendance at his meetings even exceeded the capacity of this huge structure, and he began open-air Gospel Campaigns with an initial gathering of over 150,000 people! Since then, he has conducted city-wide meetings across the continent with as many as 1,600,000 people attending a single gathering using towering sound systems that can be heard for miles.

It has now been some thirty years since Reinhard Bonnke founded the international ministry of Christ for all Nations (CfaN), which currently has offices in the United States, Canada, Germany, United Kingdom, Africa, Singapore, Australia, Hong Kong and South America.

Since the start of the new millennium, through a host of major events in Africa and other parts of the world and aimed at seeing 100,000,000 souls record a decision for Jesus Christ in this decade, some 44 million have responded to the Gospel call.

Reinhard Bonnke is also recognized for distributing over 90,000,000 copies of

How to Get a Miracle from God

The Lord Your Healer

The Marching Orders of the Church

Used by permission of Reinhard Bonnke.

For more information about Reinhard Bonnke and his current ministry please visit www.cfan.org and/or https://www.facebook.com/evangelistreinhardbonnke.