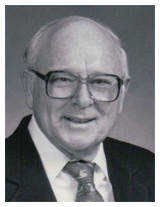 Richard E. Orchard, was born on January 13, 1920 in Ishpeming, MI, the son of the late Richard and Doris (Bastin) Orchard. Rev. Orchard graduated from Iron River High School in 1937.

He then attended North Central Bible Institute in Minneapolis, MN where he was in a musical group with C. M. Ward. For many years he traveled with Ward, the noted Revival-Time speaker. Orchard was ordained by the Wyoming District of the Assemblies of God on November 11, 1945.

Orchard wrote several books and tracts including Look Who’s Coming and This is Our Hope.

He pastored for over 60 years, was an evangelist and camp-meeting speaker. He was known as a "Prince-of-preachers" and his musicianship as an Accordionist took him all over the world. His work is over and he is rejoicing in heaven today. He has “laid up treasure in heaven” and will hear the words, “Well done, good and faithful servant. Enter into the joys of your Lord.”

Brother Orchard joined the heavenly host on January 17, 2015 at the blessed age of  95.

Manifestations of the Spirit

The Cost of Discipleship

A Beggar in the Palace

A Box of Bones

Music and the Gospel

When God’s Word Was Lost in God’s House

The Song of the Redeemed

Occupy Until I Come

What Is God Doing with Me

Used by permission of Beth Orchard and Lauren Orchard.