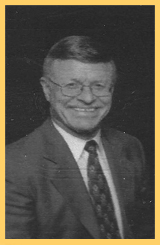 Robert Teel was born in Ada, Oklahoma and raised in Baldwin Park, California, near Los Angeles.  In high school, he was a National Champion on the Rings event in the sport of Gymnastics.  Many experts believed he was destined to win a gold medal for the United States in the Olympics.  However, at the height of his Gymnastics career, he began to abuse drugs and alcohol, shattering all hopes for Olympic competition.

After descending to the depth of sin and ruin, on the brink of suicide, he was miraculously saved and instantly delivered from alcohol and drugs on January 31, 1972, at his grandparents' home in Tishomingo, Oklahoma.  Robert has been in full-time ministry for forty-five years - 35 years as a full-time evangelist.  He has preached all across the United States and in Canada.  He has preached camp meetings in Oklahoma, Texas and West Virginia.

God healed his burned-out mind and gave him a unique, God-given ability to quote the Word of God.

Robert is uniquely talented and has mastered several puppet voices; Shadrack, the dog; Moody the Memory Monkey and Mr. Ugly.  He also does ventriloquism.

He is an ordained minister with the Oklahoma District Council of the Assemblies of God.

Used by permission of Robert Teel.