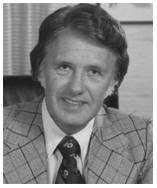 Roy Harthern was a giant of the faith, who blazed trails as a musician, pastor, evangelist, founder of Charisma Magazine, broadcaster, educator, author and statesman.

Born in England, Harthern traveled throughout the United Kingdom and the United States as a pianist with both his father and Smith Wigglesworth. He began his ministry with the Assemblies of God near the end of World War II and served as an officer in the British Army. He came to America during 1949 where he met and married Pauline in 1951. Together they served as evangelists and pastored churches in both Florida and Texas.

Since leaving Calvary Assembly in 1981, the Hartherns continued to travel around the world as evangelists, Bible teachers, and authors.

Pastor Harthern passed from this earth on July 6, 2013.

Used by permission of Leanne Harthern and Suzanne Hinn.