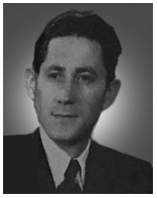 Stefan Gulyas was born on June 4, 1922, in Homorod Szent Marton, Romania, son of the late Istvan and Katherine (Turi) Gulyas.

Called to serve, he was a missionary for the First Assembly of God in Eastern Europe for over 40 years, and assisted in building over 100 churches. Stefan was ordained by the Assemblies of God on June 13, 1962. He authored two books.

Steve followed the light towards heaven on Tuesday, April 9, 2013.

Used by permission of Diane Gulyas.