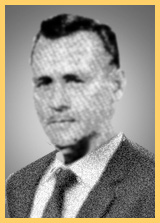 Vernal Roy Hamilton was born July 28, 1921 in Casper, Wyoming. He was reared in Trenton, Missouri.

Vernal  began his ministry in 1957 and was ordained by the Northern Missouri District of the Assemblies of God on March 17, 1965.

Brother Hamilton served the Lord as both an evangelist, pastor an church planter. He pastored churches in the Carolinas, Iowa, California, Missouri and a number of towns in Texas.

He Drinks Our Dregs

Who Is in the Crowd?