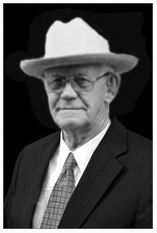 Waymon DeWitt Taylor pastored or co-pastored about eighteen churches throughout his eighty years of faithful service. He was born in November of 1894. He was saved at the age of 18 at the Apostolic Church in Loafer's Glory, Texas.

Taylor felt called to the ministry, but his Father threatened to put him in jail if he became a minister. His father finally relented and bought him a Bible. His first revival was in Austin, Tx, at the age of 19. In 1913 he met the love of his life, Annie Laura Chiles and they were married in 1914. He and Annie held services for about 5 years in and around Austin. They encountered many hardships including people throwing eggs at them, cutting the ropes of the tents and carrying off the seats.

Bro. Taylor was ordained in 1917 and his wife in 1918. They travelled around the area and held revivals in small towns including Rockdale, Hicks, Roger and Liberty Hill. They went to Oklahoma to hold revivals. They came back to the Austin area around 1925 and were told about a need for a church in Saratoga. They helped build a church there and returned to San Marcos to help.

They continued to travel all over Texas finding jobs where they could and preaching wherever they found a job. They ended up back in Houston in 1935, and preached in La Porte, Magnolia, Wigginsville, Rosenburg and Cottage Grove.

In 1946, Brother Taylor went to Louisiana to have a revival at Bossier City and Pineville. He then took a church in Cullen, LA. He stayed there for 7 years.
He took a church at Saint Joe, TX in 1953 and worked 7 1/2 years. Then he took a church In Sulphur Springs near Elkhart and pastored 6 years.
In 1960 He took the church in Davilla, TX, for 4 years and then moved back to Oakwood. He continued to hold revivals in that area, including Buffalo, Palestine and Jewett.

Brother Taylor was 92 years old when he preached this message.

Used by permission of Jason Taylor.