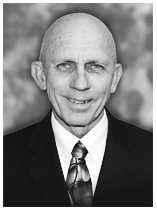 Pastor Bobby Johnson has led Van Buren, Arkansas' First Assembly of God for thirty-five years. He is a graduate of Evangel College in Springfield, MO and the University of Central Arkansas

Johnson has led the church through several extensive building programs.

The church has a weekly television ministry reaching all of Arkansas and broadcasts its services on the web. In addition to this media ministry, a strong Sunday School and other traditional church ministries, First Assembly hosts a retirement community and recently dedicated an eight million dollar Alzheimers unit, one of the finest facilities in the United States.

Brother Johnson is member of the Assemblies of God general presbytery. He has been honored on the floor of the US House of Representatives and has served as a guest chaplain for Congress.

Before coming to First Assembly, he served as the Arkansas District Assemblies of God youth leader and pastor of three other churches.

Isaac and Rebecca: A Love Story

Is the Church Relevant

Let Me Tell You Who Jesus Is

How Do You Want To Be Remembered

Used by permission of Bobby Johnson.