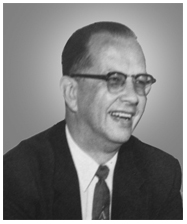 C M Ward was a pastor, evangelist, and radio broadcaster.

Ward graduated from Central Bible Institute (now Central Bible College) in 1929, and went to Eastern Canada to take up pastoral duties. He married Dorothy Hymes--a union that lasted 67 years. Later he entered the evangelistic field. In 1945, he went to the Full Gospel Tabernacle in Bakersfield, California, where he served as pastor for 9 years.

He used radio extensively while in the pastorate in Bakersfield, which later made him a unanimous choice to be appointed as radio speaker for the Assemblies of God. In December 1953, Revivaltime went on the ABC network with Ward as its speaker. Within a year, Ward's dynamic ministry caused the broadcast to be given major ratings by ABC officials, who listed it as the top religious program in many parts of the country. Over the next 25 years, Ward preached more than 1,300 weekly radio broadcasts on over 650 stations.

He also published the radio sermons in annual volumes, 23 hardback volumes in all, as well as numerous other books and over 250 booklets. More than 2 million copies of his popular "Revivaltime Miniature" series were distributed with testimonies from men such as the late Colonel Sanders, Dr. Wernher von Braun, Colonel Frank Borman, and J. C. Penney.

In 1973, Ward moved to the West Coast to take the appointment of president of Bethany Bible College (now Bethany University), continuing to be Revivaltime speaker until 1978, when he retired from the radio broadcast. His autobiography, The C. M. Ward Story , was published in 1976. Ward received more than 50 awards, including being Central Bible College alumnus of the year in 1961. He received an honorary doctorate from Northwest University in Kirkland, Washington. He also was named to the national Religious Broadcasters Hall of Fame in 1993.

Among Ward's noted converts was the Evangelist R W Schambach. Brother Ward went to be with Jesus on July 12, 1996.

Desperation Is Better than Despair

I Will Arise and Go

Israel in the Purpose and Plan of God

Of His Fullness We Receive

The Battle of the Sickle of the Harvest

The Church at Pergamos

The Deterimant Council of God

What Time Is It?

A Sin Unto Death

Agnosticism Is Not the Answer

All Roads Lead to Rome

Am I in that Casket?

Can You Take Advice?

Coward and a Cheat

Did Satan Know the Plan of Redemption?

Discrediting the Birth of Jesus

Divorce: A Grief, not a Goal

Do You Have Anything to Say Before Sentencing

Down in the Dumps

Eight Lesson from a Black Man

Every Day Is a Gift

Exclamation Is Better than Explanation

Experience in the Wilderness

Five Dividends of the Baptism in the Holy Spirit

Foes in the Unknown

Go to the Devil

God Is Not Robin Hood

Greater than Our Conscience

Had There Been No Jesus Christ

He’s Got the Whole World in His Hands

How Can I Be Clean

How Happy Should a Christian Be?

How Many Will Go to Heaven?

How to be Happy Part 1

How to be Happy Part 2

How to Get Your Healing

How to Get Your Prayers Answered

How to Receive Part 1

How to Receive Part 2

How to Receive Part 3

How to Talk to A Child about Death

I Owe My Father and His Father

If It All Counted for Nothing

In Order that Life May Come

Intercessions of the Spirit

Is Disease the Work of Demons?

It Isn’t Easy to Live with a Perfect Person

It Will Come Back

It’s Hard to Live with Perfection

Keep the Sunny Side Up

Looking in the Face of a Pig

Man Would Not Abandon His Bride

Michael Shall Stand Up

No Confidence in the Flesh – Part 1

No Confidence in the Flesh – Part 2

No Confidence in the Flesh – Part 3

No Confidence in the Flesh – Part 4

No Confidence in the Flesh – Part 5

Nothing to Fear but Fear Itself

One Heart and One Way

One Sermon that Shook a City

Paul’s Thorn in the Flesh – Part One

Power in the Blood – Part One

Power in the Blood – Part Two

Prayer Can Hurt You

Preaching to the Dead

Purge Me, Wash Me

Put Shoes on His Feet

Putting Yourself in the Other Fellow’s Place

Salvation Is Not Science

Sell Out for God

Should We Look for Another

Sinning by Failing to Pray for You

Someone Who Came Back

Something Better than Tongues or Prophecy

The Antichrist, from Whence?

The Best Deal in Town

The Best of All Credentials

The Best Thing I Can Do for Another Human Being

The Cloud of Witnesses

The Danger of ‘Only Teasing’

The Desire to Get Away

The Fleet Is In

The Friend of Sinners

The General Patton of the Old Testament

The Great King and the Poor Wise Man

The Greatest of these Is Love

The Handshake that Shook the World

The Height of the Apple Tree

The Last Days of the Church

The Law of Light

The Liberty of Sin

The Miracle of Sustained Faith

The Power of Attorney

The Prophecy of Moses

The Responsibility of Privilege

The Revelation of Jesus Christ

The Sin of Being Led Astray

The Supply of Need

The Watergate in All of Us

The Word of a Gentleman

There Are No Standbys

There Is No Difference

They Shall Lay Hands on the Sick

Turning the Word Upside Down

Two Views of this Century

We All Need a Middleman

What About My Future?

What Do I Mean When I Say I Know God?

What Do You Weigh?

What If this Were Your Last Year?

What Is the Church?

What is the Use of Water Baptism

What Makes a Winner

When He Reached Down His Hand

When You Hit Bottom

Where Are Mommy and Daddy?

While the Children Are at Home

Why Do Christians Get Sick

Why the AG Does not Promote Divorce

Why We Don’t Play the Lottery

Why You Should Be a Christian

Will You Go to Hell for Looking?

Used by permission of Martha Jane Sherburne and Suellen Musgrov.