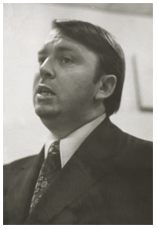 International Evangelist Carl Richardson served as director of the radio and television ministry of the Church of God for over twelve years, and he is now heard daily around the world and throughout the United States on the widely acclaimed "Oasis" radio broadcast. He has been a member of the Board of Directors of the National Religious Broadcasters for 20 years, and is a frequent keynote speaker at their meetings. Rev. Richardson has been elected often as a member of his denomination's highest-level deliberative body, the General Executive Council of the Church of God, and he currently serves as a chairman or member on the boards of several transdenominational ministries.

His interpretive readings of The New Testament, "The Psalms and Proverbs", and "The Words of Jesus", as well as numerous teaching tape albums, continue to be bestsellers in bookstores across America and in many nations. He has authored 12 books and more than 100 booklets.

Carl Richardson has spoken to large crowds in major venues all over the United States and the world, including an open-air meeting in South Africa that drew three million people. His most aggressive campaign was the Evangelism Beyond Borders "MILLION SOUL CRUSADE". Through the work of the Holy Spirit, a network of key partners in many nations was successful in a crusade of faith to help win AND disciple a million souls by January 1, the year 2000. The focus was on those Final Frontiers of evangelism where more than 3 billion souls (one-half of the world's population) exist in poverty and despair. There is no time to waste in this new millennium. A million is not enough.

In Russia and the nations of the former Soviet Union, inside mainland China, and the nations of Islam, a practical strategy of planting 1,000 life-giving cell churches will put into effect the New Testament pattern of evangelism and discipleship. Individuals are being ministered to daily with inner-city churches and home-mission programs in the United States, and schools, medical centers, daycares and orphanages worldwide. Bibles in scores of languages and dialects are being sent into a number of countries, regardless of barriers or obstacles.

Carl, his wife, Beverly, and their ministry staff have been based in Brandon, Florida (the Tampa Bay area) for the last sixteen years.

Used by permission of Carl Richardson.