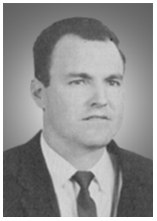 Charity Harris is a long-serving Assemblies of God Missionary to Africa. The Harris family began their overseas work in the 1950's as pioneer missionaries to Tanganyika, later known as Tanzania. Charity later served in Nyasaland and South Africa. In his senior years he continued to work in Africa, building a number of churches in Niger.

Brother Harris has written a number of books: Africa Has Me Hooked, Balanced Faith, Good News from a Far Country, Evangelism is Everybody's Business, Is There No Balm in Gilead, Only a Little Boy, The Anointing, Treasures of Faith, Wings of the Wind, The Right Choice, The Patriarchs of the Old Testament and Cast Thy Bread Upon the Water.

Brother Harris retired to Oklahoma. His health prevented him from preaching, but the desire still burned within him. He went to be with Jesus on January 8, 2021.

The Joy that Took Jesus to the Cross

Used by permission of Charity Harris.