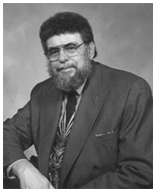 Dick Reuben became a believer in Yeshua, the promised Messiah of Israel, on the evening of March 1st 1971. In giving his heart to the Lord at a Rex Humbard crusade in Norfolk Virginia, that night an outlaw biker that society had written off as a habitual loser, was radically saved and called by the grace and mercy of the Almighty God of Abraham, Isaac and Jacob.

Dick entered full time ministry in 1985 and was a pastor of a small church in Indiana for several years before becoming a traveling Evangelist. Having studied under a noted Messianic Rabbi for 6 years Brother Reuben attended the Institute of Ministry in Bradenton, Florida and Christ for the Nations in Dallas, Texas. Joining the staff of Rock of Israel in January of 1990 as a field representative with the Assembles of God home missions in Southern California. While living in southern California Brother Reuben received his DD. Degree from, and for a short time taught at, the Southern California Theological Seminary as a professor of Old Testament theology.

Brother Reuben is now an international speaker and teacher with a heart to bring the gentile church into a better understanding of Biblical patterns from a Jewish perspective. Dick carries a special anointing of unity and understanding to the modern church. As a Messianic Jewish minister he is often called the foundational teacher, instrumental in bringing the pattern for revival to Brownsville Assembly of God in Pensacola, Florida. The Brownsville Revival has been accepted as one of the mightiest outpourings of the Holy Spirit power in America in the last one hundred years.

America Under Attack – The Solution

Used by permission of Dick Reuben.