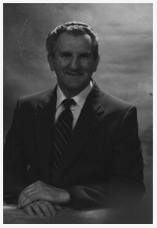 The Reverend Donald Henson grew up in Greenville County of South Carolina. A country boy who was raised by good parents and soon after his late years in high school, found many ways to get into mischief and sin. He joined the U.S. Air Force and came home on leave where he met his future wife in Greenville. They were married and lived in Travelers Rest, SC and later moved to the Little Texas community. While living there they were visited by a local Assembly of God pastor and his family. The pastor's family soon became friends with his wife and daughter. She attended church and soon gave her heart to The Lord Jesus and so lived before Donald until he soon followed and came to serve Jesus as well. Not too long afterward he received the call to preach The Gospel.

The first church he pastored was in Startex, SC and it grew under his ministry for five years. Later he was ordained with the South Carolina District Assemblies of God and served for ten years as presbyter for the district. His next church was the Assembly of God in Clinton, SC where he pastored for twenty five years until he retired in 2000. After retirement, he moved to Laurens, SC where he now resides and serves as associate pastor for the senior adult ministry at First Assembly of God. Brother Henson helps in many ways at the church including preaching the mid week service there.

The Start of Jesus’ Public Ministry

Used by permission of Donald Henson.