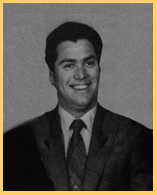 Glenn Mangrum was born in Dallas, Texas in 1942. He was very ill with circulation problems and not expected to live. Pastor L.L. Ammons prayed the prayer of faith for him and he was miraculous healed. Ammons also prayed that God would use him as a preacher. Twenty-three years later he was called to pastor Ammon’s home church in Dallas.

Ordained with the Assemblies of God, Glenn served pastorates in Dallas, Athens, and Garland, Texas. He was in ministry for forty years.  In his younger days he served as Sectional Youth Representative of North Dallas Section of the Assemblies of God. Later he served for more than thirty years as the secretary of the sectional committee. Brother Mangrum is retired from full-time ministry and currently lives in Como, Texas.

Used by permission of Glenn Mangrum.