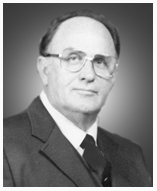 He became a licensed minister in the Pentecostal Holiness Church, North Carolina Conference in 1942 and was ordained in 1944. From 1943 until 1962, he pastored numerous churches in the N.C. Conference and served as Vice-President of the General Sunday School Convention and Assistant Superintendent of the N.C. Conference. In 1961, he was elected Assistant General Superintendent of the International Pentecostal Holiness Church and served as Director of the Department of Education.

In 1965, he was elected Vice-Chairman and served as Director of World Missions until 1969. In 1969, he was Ordained and Titled Bishop and served as General Superintendent until 1981.

The Work of the Ministry

The Role of the Pentecostal Holiness Church in Evangelism Today

The Prophet Who Told the Truth

If God Be For Us

The Contemporary Church – Our Practice

The Church on the Frontier

A Refuge for the Soul

The Historical Church – Our Preparation

Confirm the Word with Signs Following

The Lord Forbid It

He Cast Out an Unclean Spirit and Healed the Sick

The Lord Forbid It

Used by permission of Floyd Williams.