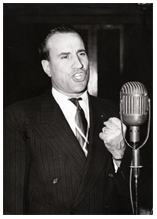 He was an ordained minister with the Assemblies of God Churches for 70 years.

He was recognized by the General Council of the Assemblies of God in Dallas, Texas, for planting ten new churches.

He was a dynamic communicator of the gospel of Jesus Christ, an avid fisherman, greatly esteemed for his expertise, and an excellent marksman at hunting.

A Cry for the Supernatural

Are You Living for Time or for Eternity

Can God? God Can

Christ Is All You Need

Earnest of the Spirit

Helper in Time of Need

How the Holy Ghost Is Given

How to Be Ready for the Rapture

I’m Dreaming of a Right Christmas

Living Under the Weight of the Cross

Quench Not the Spirit

Seven Emblems of the Holy Ghost

Seven Solemn Warnings to the Christian

Strength for Your Weakest Hour

The Precious Blood of Jesus

The Real Meaning of Easter

The Results of Being Filled with the Holy Spirit

The Second Coming of Christ

The Touch of the Master’s Hand

They Said It Couldn’t Be Done

Turn Your Eyes Upon Jesus

What Do You Know?

What Does Calvary Mean?

What God Is Able to Do

What the Second Coming Means to the Christian

What Will It Take to Bring You to God?

When God Opens Our Eyes

When the Sun Goes Down on a Wasted Life?

Where there Is No Vision

Why Christians Should Be Happy