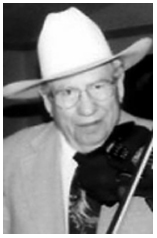 Russel Reed Gipson, Jr. was born in Osage County, Oklahoma. He was born again at the age of 19. Called to the ministry, he attended Southwestern Assemblies of God College in Waxahachie, Texas, graduating in 1951. He served the Assemblies of God for more than sixty years. Reed pastored several churches but left his greatest mark as an evangelist.

Gipson was an exceptional musician, playing the guitar, the piano and the violin. He crisscrossed America singing and preaching with his family, as the Gipson Family singers.

He always had a kind word to say, a smile on his face, and a song to lift your spirit .

Brother Gipson passed from earth to glory on September 26, 2011 at the age of 83. Heaven's band gained a fine fiddle player.

Elisha’s Desire for the Mantle

Face to Face in the Wilderness

It Runs in the Family

The Divine Excess of God

The Grace of God Appears

The Hand of the Lord

The Importance of the Holy Ghost

The Love of Money

The Word of God

The Year of Jubilee

Who Then Can Be Saved?

Why I Am a Holy Roller

Would You Make the Trip

*The audio quality on this message is poor, but it is the last message Brother Gipson preached, just days before his death.

Used by permission of Dennis Gipson.