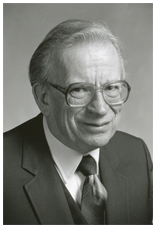 Dr. Horton received his educational training at Los Angeles City College (A.A., 1935); University of California-Berkeley (B.S., 1937); Gordon College (now Gordon-Conwell Theological Seminary) (M.Div., 1944); Harvard University (S.T.M., 1945); and Central Baptist Theological Seminary (Th.D., 1959). He was Distinguished Professor Emeritus of Bible and Theology at the Assemblies of God Theological Seminary (AGTS), where he taught from 1978-1991. Prior to that, he served as chair of the Bible Department at Central Bible College from 1948-1978 and professor at Metropolitan Bible Institute from 1945-1948. He wrote the Assemblies of God Adult Teacher Sunday school curriculum for over twenty-five years. In 1980 he served as president of the Society for Pentecostal Studies. Upon his retirement from teaching in 1991 he held the position of General Editor of the Pentecostal Textbook Series/Logion Press in Springfield until 2000.

Dr. Horton has been recognized as the premier Pentecostal theologian. A renowned scholar and prolific writer, he continued to travel the world to twenty-five countries as a lecturer until age 92. He authored dozens of books-many of which have been translated into multiple languages, book chapters, and manuals and published more than 250 articles and book reviews. He was listed in Who's Who in Religion and Outstanding Educators of America. His writings have appeared in publications as diverse as The Encyclopedia Americana and the Dictionary of Pentecostal and Charismatic Movements. He served as chair of the editorial committee for The Full-Life Study Bible and its 2003 revision titled Life in the Spirit Study Bible. Foreign translations commonly refer to this as The Fire Bible. His book, What the Bible Says about the Holy Spirit, has long been the definitive text on that topic in universities and seminaries around the world. Dr. Horton served as the official translator of 1 and 2 Corinthians from Koine Greek to modern Messianic Jewish vernacular for the Tree of Life Bible,  an undertaking done in cooperation with the Messianic Family Bible Project and now the official Bible of The King's University.

Committed to a sense that following Christ means being a "lifelong disciple," Dr. Horton continued to serve the Church well into his nineties, on the Assemblies of God Commission on Doctrinal Purity, an adviser for AGTS doctoral participants, and an original board member of Israel's Redemption-a role in which he served to the end of his life.