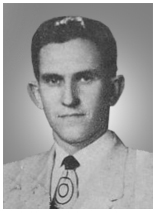 Tommy Lee Osborn was born on December 23, 1923, on the small family potato farm, in Grady County, Oklahoma. At a church in Sand Springs, Oklahoma, Osborn met future televangelist Oral Roberts, who would become his lifelong friend for over 70 years, until Roberts's death in 2009. Osborn frequently went with Roberts to help with evangelical meetings. Roberts did most of the preaching, Osborn did everything else, including playing the accordion and the piano for the musical part of the meetings. Osborn had experienced a Christian conversion in 1937, at the age of 13, when his older brother took him to a Pentecostal church in Mannford.

In 1939, aged 15, Osborn was milking the cows when he began to cry. He fell on his knees, praying and asking God what was happening. The Lord, he said, called him to be an evangelist, while he laughed and cried at the same time, overwhelmed by what was happening to him. He dropped out of high school after completing eighth grade and hit the road with E.M. Dillard, a traveling evangelist. Osborn was responsible for organizing evangelistic meetings and was also in charge of youth services in the evening. He traveled with Dillard through three states. The last one was California, and he met Daisy Washburn, in Los Banos, California at one of the meetings. It was 1941 and he was only 17 when he fell instantly in love.

On April 5, 1942, Osborn married graduating high school student and farmer's girl, Daisy Washburn Osborn. He was 18, and she was only 17. Shortly thereafter, they set out on a life of ministry and missionary travel, including a trip to India when Osborn was still only 21. In time, they carried the Gospel of Christ to tens of millions of people all over the world, declaring it with faith and confidence. However, that early mission in India, preaching at Lucknow, was not fruitful. Their ministry lasted less than a year in India, and they returned home because of critical family sickness. In 1947, the Osborns had their only daughter, LaDonna Osborn she was raised accompanying her parents on the platforms of global mass miracle evangelistic crusades.

The Osborns first gained public notice shortly after returning from India, as evangelists on the Big Tent Revival circuit in the United States and Canada. There, they preached to audiences often numbering over 10,000, in open-air meetings and under large tents in settings such as fairgrounds and stadiums. The Osborns emphasized the love and compassion of God, rather than the "fire and brimstone" commonly used by many evangelists of the era, and they practiced supernatural healings in their meetings.

By the early 1950s, their emphasis began to shift more and more toward international missions. They held large crusades in Latin America, Asia, and Africa and crowds grew rapidly, at times exceeding 100,000. After Osborn' crusades in Thailand in 1956 and Uganda in 1957, Pastor Fred Wantaate of Makerere Full Gospel Church said that "after that crusade in Mombasa, the fountain of the river of Pentecostalism spread in the heart of East Africa."

Over the course of the next 5 decades, Osborn and his team traveled to more than 70 countries and reached millions of people. They created prolific quantities of evangelistic and training materials, some of which were translated into more than 80 languages.

Osborn died on February 14, 2013, at the age of 89. According to his daughter, LaDonna, he had been in good health until his body began weakening just a few days before he stopped breathing.

Five Reasons to Be Healed

Christ’s Energy for Us

He Believes in Us

The Believers Mission of Healing

Used by permission of LaDonna Osborn.