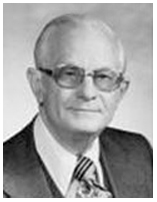 Thomas F. Zimmerman served the Assemblies of God as General Superintendent for 26 years, longer than any other leader. Under his capable leadership the denomination more than doubled in adherents, reaching well over a million in the United States. Zimmerman led the denomination in breaking down racial barriers, ordaining men and women of color and adopting a policy on civil rights.

Zimmerman's mother was miraculously healed of tuberculosis and dedicated him to the ministry before he was born. Zimmerman began preaching while still in his teens and pastored a number of churches in the mid-west before serving as a denominational executive. He was ordained in 1935.

A man of the Spirit, Zimmerman once compared the Holy Spirit to a mighty river and the Scriptures to the banks of that river. Brother Zimmerman said that great harm occurs when the river overruns the banks, but that the river does great good when it stays within the banks.

Zimmerman also served in various offices, including president of the National Association of Evangelicals and on committees for the National Religious Broadcasters and World Pentecostal Conference.

A Light in a Crooked World

A Profile for Significant Living

In Christ All Fullness Dwells

Stand Firm in the Faith

The Challenge Before Us

The Word of God

What Manner of Persons Ought Ye to Be?

What Then Does God Require of Us

Where Is Jesus Now?